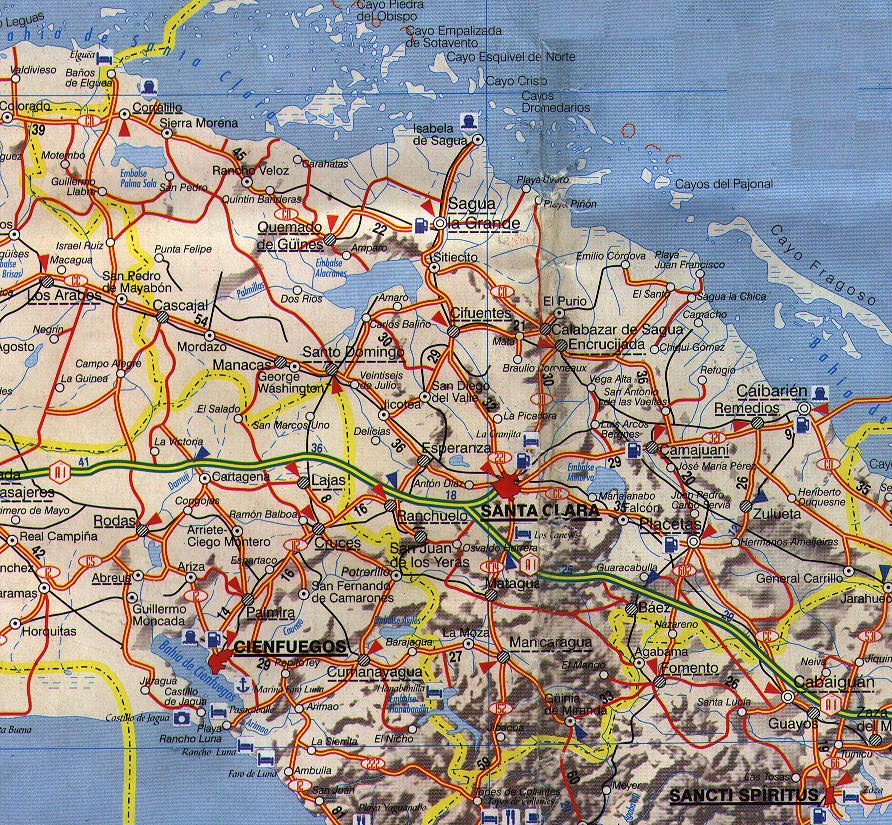 Villa Clara Province is the second largest producer of sugar in Cuba, with other crops, particularly tobacco, playing an important part in the local economy. In the south, the mountain resort of Hanabanilla in the Escambray Mountains is being primed for tourism. It is this area’s natural beauty which holds most appeal to the visitor.

Historically, Villa Clara, one of the country’s central provinces, has been regarded as one of the most strategically important areas of Cuba. Although the area has yet to be recognised as one of Cuba’s premier tourist destinations, the coast of Villa Clara is dotted with numerous cays and coral reefs; and there are some good sandy beaches in the north.

The capital of the province, Santa Clara, home to one of the country’s four universities, is interesting enough to warrant a visit.

Around Santa Clara, the land rises into the Alturas de Santa Clara. The highest point in the province is in the Alturas, at 464m above sea level. Villa Clara also has numerous lakes, which are used for both water sports and fishing. The largest Cuban river to drain into the Atlantic, Río Sagua la Grande, is also in Villa Clara province.

Elguea is 90 minutes drive from Varadero and 10 minutes away from the beaches of Salto and Ganuza.

The most beautiful and unspoiled Cuban beach is located in central Cuba, about hour drive north of Santa Clara at “Cayo Las Brujas”. Beaches, fauna, flora and an pure environment in this isolated nook protected from the hectic world. Endemic tropical nature close to the Bahamas Channel, Cayo Las Brujas owns wonderful coral reefs is a perfect place for scuba diving and wind surfing. Kilometers of coral reefs with a large submarine fauna, it’s the world second widest after the Australian reefs. This site is practically unmatched in the world, large shoals of tarpon, jacks spadefish, groupers and barracudas provide a special attraction for divers, also iguanas live there.

Cayo Santa Maria lies at the western end of the Archipielago de Sabana-Camaguey, 25 km west of Cayo Guillermo, in the Bahia de Buenavista ecosystem, declared by UNESCO as a “Biosphere Reserve”; in a setting rich with endemic species protected by a beach of incomparable beauty, with more than ten kilometers of fine white sand and a sea of varying shades of blue.

The key (cayo) is united to the mainland by an impressive causeway called “El Pedraplen” constructed across the Bahia Buena Vista from the port of Caibarien at a cost of 100 million pesos. This engineering marvel built between 1989 and 1999, is over 48 km long and has 46 bridges, and is worthy of its Puente Alcantara Award. The bridges allow an exchange of tidal waters, an improvement over the earlier Cayo Coco causeway. Paving was completed in 1999, just as Las Brujas Airport was being built on Cayo Las Brujas, 45km northwest of Caibarien.

Travelers from Remedios, a colonial town with its parrish church and to Santa Clara, seat of the Ernesto Che Guevara Memorial, cross crystalline and tranquil waters and keys, and can observe hawks, pelicans and the amazing pink flamingo.

The coffee plantatoins on the Manicaragua slopes of the Escambray mountains produce coffee beans that are considered to have an “unparalled aroma”. The tobacco grown on the lower planes, El Hoyo de Manicaragua, is used by the cigar factory of Manicaragua City.

The earliest inhabitants, Siboneyes tribesmen, called their home, rather immodestly, Manicaragua, the Arawak language for “The Land of the Brave.”

Playa Caibarien is famous for its crabs and its intense maritime life on the northern coast of Villa Clara province.

This town is a typical, but beautiful, example of Spanish colonial architecture. The intrusion of the sugar and cattle industries have not detracted from its laid-back atmosphere. The centre is marked by the Plaza Marti and, as with all Spanish cities, the streets span out from the Plaza with well thought out symmetry. The Plaza Marti is similar in style to the Plaza Mayor in Trinidad.

Other interesting things to see are The Museum of the Remedion Parrandas and The Church of San Juan Batista de Remedios.

Sagua La Grande is located on the north coast of the province of Villa Clara in central Cuba.

A buzzing provincial town, with a pleasant Parque Central, Santa Clara is most famous for its connection with Che Guevara, whose attack on a Batista troop train in the city in December 1958 helped persuade the dictator that his days were numbered.
This provincial capital is well worth visiting, beyond the suburbs you’ll find a buzzing place with streets lively with people going about their daily lives, and the city benefits from having a large student population. The centre seems well looked after and relatively litter-free. A startling sight to anyone arriving from Havana.
There are some interesting museums worth taking in and the small brick red-tiled houses lend themselves to an atmosphere of calm and discretion. For most people the area Parque Vidal is the most eventful place in the city, as well as being the geographical heart of the city, it is also its social centre and there is usually some sort of entertainment going on at weekends. A monument marks the spot where revolutionary hero Leoncio Vidal was killed, and benches line the promenades that cross and circle the park. On the plaza’s north.
Share