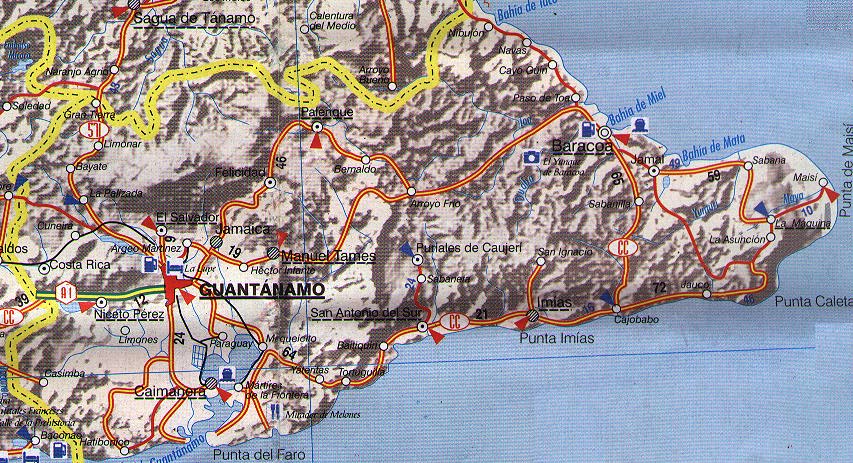 Cuba’s easternmost province is one of the least visited yet most interesting of all the country’s municipalities. The name Guantanamo is most widely known because of the infamous US naval base at Guantanamo Bay a few kilometres north of the city of Guantanamo. Though strategically and politically important, the US base occupies a relatively small isolated area that visitors to Guantanamo province are not likely to stumble on, so the real Cuban charm of the province can in fact be enjoyed as if it didn’t exist.

However in case you didn’t know already, the US military have been holding at Guantanamo Bay more than 500 “terrorists” detained since the 2001 “U.S. war on terror.” It is the authors view that a “war on the REASONS for violent action” maybe more appropriate, and that one persons terrorist is another persons freedom fighter; and that nobody should be imprisoned without charge and a fair trial. Cubans regard the US base as an illegal occupation of their land, not least because the treaty and lease of 1903 was imposed by force, it is obsolete by the norms and principles of the UN Friendly Relations Resolution of 1970, the terms of the lease have been broken, and the treaty breaks the Vienna Convention articles 56 and 62.

The province is, with the possible exception of the eastern peninsular of Pinar del Rio province, the wildest, most uncharted piece of territory in the land.

The main tourist destination of Guantanamo province is the magical little town of Baracoa, don’t miss the oportunity to come there in the week of 1 April, when heady street parties every night commemorate the disembarkation of General Antonio Maceo at nearby Playa Duaba in 1895, marking the beginning of the War of Independence.

Guantánamo’s architecture and culture is unlike the rest of Cuba. The providence is only 80km away from Haiti its closest point, across the Windward Passage and close enough to see lights on Haiti on a clear night. Guantánamo also has a high number of immigrants from Jamaica, meaning that many buildings are comparable to those of the French Quarter of New Orleans in the U.S. state of Louisiana.

The Nipe-Sagua-Baracoa mountains dominate the province, dividing both climate and landscape. The northern coast, battered by prevailing winds, is the wettest part of the country, while the south, sheltered and dry, is the hottest. The north is characterized by rainforests, while the south is arid and has much cacti.

Baracoa City is situated on a bay close to the eastern tip of the island of Cuba where the Caribbean Sea meets the Atlantic Ocean. Founded in 1512 by Diego Velazquez, Baracoa is Cuba’s oldest European settlement. Things are pretty laid back in this town and the abundance of palm trees along this coast give it a South Pacific feel.

The fact that this was an important Spanish outpost is evidenced by the three impressive forts: Fuerte Matachin, now housing the museo municipal; Fuerte de la Punta, now refitted with a restaurant; and El Castillo de Seboruco, which is now a pleasant hotel.

On calle Antonio Maceo, you’ll find people queuing for hot chocolate drinks in the baking tropical sun at the Casa del Chocolate, opposite is a lovely Casa de la Trova, holding rooftop performances and you can’t forget to visit Plaza Independencia (it is the focal point for community life in the city), Yunque de Baracoa and The Stone Zoo, which comprises a multitude of stone animals.

Guantanamo Bay is an exceptionly beautiful, natural and large subtropical bay surrounded by lush vegetation and ring of low mountains. To the West are the semi-desert “Los Cerros de los Monitongos” mountains. This is driest place in all of Cuba with a unique range of animal and plant species. To the North East are the wettest mountains and the largest rivers in all Cuba.

Caimanera is a fishing village and port of 10,600 people. Built on the West shore of the sheltered Guantanamo Bay, just North of the US naval base. The port ships chiefly salt, sugarcane and coffee. Residents of this remote, southeastern community of steaming, narrow streets and weathered wooden houses are the closest Cuban neighbours to the US military camp still filled with prisoners from the war on Afghanistan.

The arrival of Taliban and al-Qaida prisoners added a new chapter to what Caimanera residents say is a long story of the town and a 45-square-mile piece of land seized by US troops in 1898. The Americans have remained, despite opposition from the Cuban government. Cuba did not initially oppose the holding of prisoners on its soil.

“Thanks to the base, Caimanera grew,” said Ofelia Garcia, the community’s historian. “But it has also suffered much because of its presence. We have not been able to develop a normal life here.’’ The community of fishermen and salt mine workers flourished at the beginning of the 20th century precisely because of the base’s construction. It was a magnet for Cuban workers and a popular spot for visitors, including Cubans from across the island and people from nearby countries such as Jamaica. The base, Garcia said, eventually had thousands of Cuban employees. Many American military officers and their families lived off base in Caimanera.

That all changed in 1959 due to USA’s hostile response to Fidel Castro’s popular revolution. In a little less than three years, Cuban defense forces formed a military zone along the 17-mile perimeter of the American base, seen on this side as enemy territory. During that period, thousands of Cuban employees were fired or quit their jobs at the base, Garcia said. Many former workers left Caimanera, but those who stayed – and successive generations – learned to live with the watchtowers, the fences, and the proximity of mine fields around the U.S. installation.

Until February 2009, several army posts on the road leading to Caimanera were open only to the town’s residents and their relatives. Now some foreign tourists that have authorisation are allowed to visit Hotel Caimanera for lunch. Staying overnight maybe possible sometime soon. The hotel was originally opened to forieign tourist in 1991 but that stopped once the last George Bush started warmongering.

The community grew so poor that in 1985 Castro’s government ordered salaries here and in the nearby town of Boqueron to be raised by 30 percent to encourage workers to stay.

Living so close to the base, Caimanera residents have (or had) access to the US military’s television programming, providing glimpses about the arriving prisoners that few have had. Judging by the number of prisoners and the space set aside to house them, “it must be pretty bad over there,” said Manuel Prieto, 73, a resident and former base worker.

Prieto himself was a prisoner on the base for six days in 1961 when he was questioned by US military officials about possible Cuban agents at the American installation. Prieto, who worked 14 years at the base as a welder’s assistant, said he still suffers nightmares. “I dream that I am there,” he said, “but I cannot leave.”

Lets hope that Mr Barrach Obama and his people appreciates the injustice of the unwanted occupation of Cuban soil. It is not like the Falklands or Gibraltar with a largely non-military population who want to stay British. In November 2003, international law expert Professor Alfred de Zayas, from the University of British Colombia, detailed the position of the US base in international law, and found that there are four main ways in which the lease and the treaty that created it can only be described as illegal: 1. The treaty was imposed by force, 2. The treaty was binding in 1903, but is illegal in the post-colonial age, 3. The terms of the lease have been broken, 4. The treaty breaks the rules of sovereignty.

So now you know a bit, why not read up on it, at www.alfreddezayas.com for example, or better still come visit.. now you can.. well most of you.

Situated 90km east of Santiago and a few kilometres north of the bay of the same name. It has about 208,000 inhabitants and most of them live from producing sugarcane and cotton wool.

Guantanamera (“The girl from Guantanamo”) is perhaps the best known Cuban song and that country’s most noted patriotic song. The lyrics are based on the first poem in the collection Simple Verses by Cuban nationalist poet José Martí, adapted by Julian Orban. The music was composed by Fernandez Dias.

The city seems to have two rather unfortunate unofficial emblems. One is a depot crammed with rusting buses that have no fuel, the other is an apartment tower that was to be showcase of efficient, prefabricated architecture.

The main reason to stop in this city is to visit the lookout at the Guantanamo Bay American naval base, which is the last colonial outpost remaining on the island. These days the base is the home to around 7,000 American servicemen. It is a self-sufficient entity with its own TV and radio station , water supply, medical, sports and general recreational facilities.

The Imias City is sheltered on all sides by impressive mountains. Only two deep narrow passes, cut by the Rio Yacabo to the West, & the Rio Imias to the East allow passage. This extremely remote city could be described as quaint if it wasn’t so orderly & composed. Old guard music & announcements from huge tannoys are piped down the main streets. Imias is a fascinating quick stop for basic supplies; but you might leave behind a niggling regret that you didn’t stay & explore longer.

The small Yacabo Abajo settlement runs along the base of the fertile Rio Yacabo valley, till the Playa Yacabo beach. Yacabo Arriba is higher up the valley.

The Cajobabo beach is the place of the historic landings of José Martí and Máximo Gómez on the 10th April 1895 during the fight for Cuban Independance. The Playita de Cajobabo landing was the start of Martí’s march that became known as the “Route to Glory”.

Today Cajobabo, of about 2000 scattered inhabitants, is an unspoilt forgotten backwater. As such a perfect place to stop, swim and chillout between Baracoa and Guantanamo. If you can navigate the road to the second beach to the East, just the other side of a small headland, you might find you will have it all to yourself.

Popular amongst cyclists and nature lovers Maisi is a relatively small municipality and town in the Guantánamo Province of Cuba. Situated on the Easternmost tip of Cuba bordering the Caribbean Sea, the town offers view of other nearby islands such as Haiti on a clear day.

Known for its famous La Concha Lighthouse at Punta de Maisi, the town is home to long stretches of white sand beaches virtually untouched by tourists but known by locals.