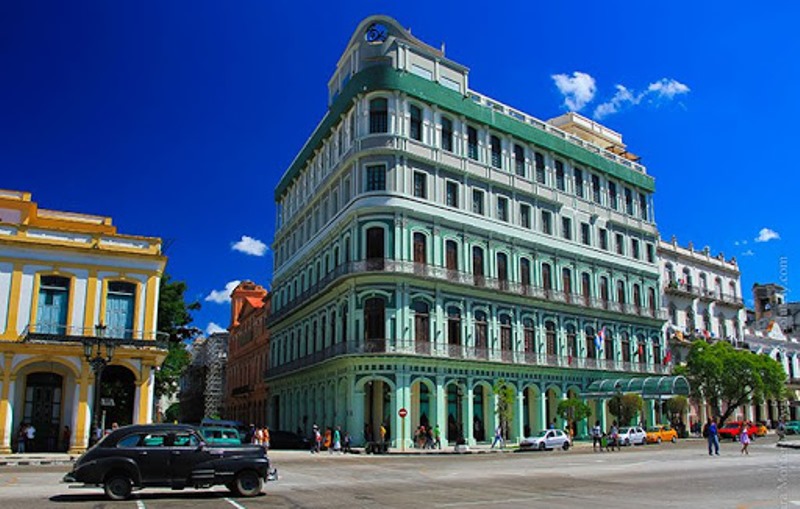 Up till recently, discerning visitors have bemoaned the lack of a really luxurious hotel in Havana. The Saratoga, which opened in November 2005, has rectified the situation.

Standing on the western edge of the Historical Centre of the city, its elegant façade overlooks the other nineteenth century architectural glories of the Prado and Parque Central. The interiors, designed by European consultants, are simple, spacious, elegant and exceedingly comfortable.

We particularly recommend the seventh floor “Saratoga” rooms overlooking the street, which have inviting window seats upon which one is terribly tempted to recline for hour upon relaxing hour, reading or watching Havana’s street life from the air conditioned quiet in the hotel – mercifully the designers thought to double glaze the windows, so the usual Havana cacophony does not prevail.

The pool, gym and bar on the roof are also oases of calm and have wonderful views over the city and the sentinel angels on the roof of the Gran Teatro de La Habana.

All the rooms have up-to-the-minute technology, the mudéjar-style restaurant is very attractive and the central courtyard has been glazed over and air conditioned so that neither extremes of heat nor Cuba’s occasional torrential downpours need interrupt guests’ enjoyment of their mojitos.

Excellently located for evenings at the opera and ballet, drinks and dinner at the Floridita and exploration of Old Havana, the Saratoga definitely has the Cubaism seal of approval and might win our Hotel of the Year Award if its service continues to develop along its present excellent lines.

It is run by the Office of the City Historian of Havana, so much of its profits are reinvested in the restoration of the city’s historical centre.